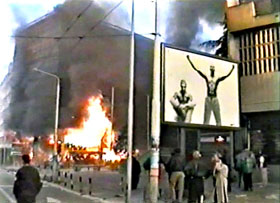 How the Yugoslav State went on is two generations after the representants of the Black Wave the subject of the work of two artists.

Serbian artist Marta Popivoda assembles in Yugoslavia, How Ideology Moved Our Collective Body archive material from public TV stations and propaganda films. The images of the Yugoslav people between 1945 and 2000 bring up images of collective choreographies that symbolise the solidarity of the socialist system. With the upcoming capitalisme and the decline of the State of Yugoslavia the collectivity of the social body ends.

Belgian artist Sarah Vanagt treats in Dust Breeding how Yugoslav history went on after the State’s decline, and focuses on the Bosnian genocide. During the The Hagues’ Tribunal against Karadžić there were shown as evidences photos of mass graves – pictures of a perverted collectivity. Vanagt searches the truth, which lies behind all images.

(In presence of Marta Popivoda)