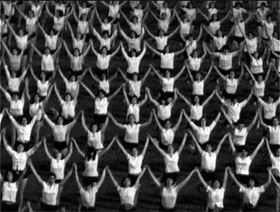 The ﬁlm deals with the question of how ideology performed itself in public space through mass performances. The author collected and analyzed ﬁlm and video footage from the period of Yugoslavia (1945 – 2000), focusing on state performances (youth work actions, May Day parades, celebrations of the Youth Day, etc.) as well as counter-demonstrations (’68, student and civic demonstrations in the ‘90s, 5th October revolution, etc.). Going back through the images, the film traces how communist ideology was gradually exhausted through the changing relations between the people, ideology, and the state.

"This research-based essay ﬁlm is a very personal perspective on the history of socialist Yugoslavia, its dramatic end, and its recent transformation into a few democratic nation states. Experience of the dissolution of the state, and today’s “wild” capitalist reestablishment of the class system in Serbia are my reasons for going back through the media images and tracing the way one social system changed by performing itself in public space." – Marta Popivoda

Marta Popivoda, born in 1982 in Belgrade, is a film and video maker and a cultural worker based in Berlin and Belgrade.