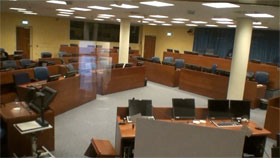 What is the value of images as objective testimonies of a conflict? Can we believe what we see? In her new work, Sarah Vanagt turns her attention to an important chapter in recent European history: the International Criminal Tribunal for the former Yugoslavia in The Hague. The artist examines obstacles to reconstructing a war that is nevertheless well documented. She has started from a simple movement of the hand – a pencil being rubbed on a sheet of paper placed over an object – and adapted this “revelatory” rubbing process to the courtroom. The film Élevage de poussière / Dust Breeding offers a penetrating account of her exploration. Measuring the gap between the facts, the material proof of these facts, the images that represent them and their interpretation, she attempts to decipher the secret language formed by traces of war. Sharpening her eye until it becomes a microscope lens, Vanagt reveals a landscape of details inviting us to look at things differently.

Sarah Vanagt, born in 1976, studied History at the universities of Antwerp, Groningen and Brighton and documentary filmmaking at the London National Film and Television School. She lives and works in Brussels.