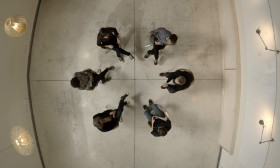 Portabella is putting forward the second part of one of his historic works, the “General report on certain matters of interest for a public screening”, which peeked out in 1976 at the start of the political transition process after Franco’s death. This second “Report” is made in the context of a severe systemic crisis in the cultural, economic-financial, political and energy fields. Above all, it nevertheless bears witness to the way civil society is coming out of this crisis with a new prominence, consisting quite simply in ordinary people’s recovering politics.

Pere Portabella  Since the 1960s, Portabella always maintained a political commitment with all those movements against the Franco dictatorship that supported individual and collective democratic liberties. In 1977, he was elected Senator in the first democratic elections and he participated in the writing of the present day Spanish Constitution. In 1999, was honoured with the Creu de Sant Jordi, the highest recognition that a person can receive from the institutions of the Generalitat de Catalunya. He has presided over the Fundación Alternativas since 2001. As a filmmaker Pere Portabella has been a relevant presence in the Spanish film world for the last fifty years. With Films 59, his production company, he fostered some of the most emblematic films in the history of Spanish cinema. Los Golfos by Carlos Saura (1959), El Cochecito by Marco Ferreri (1960) and Viridiana by Luis Buñuel (1961). A long interval ensues between Informe General in 1976 and his return to his work as filmmaker and producer at present, during which he enters the political/institutional world during the "Transition" period in Spain. In 2001, his films became part of the artistic collection of the MACBA. In 2002, he was the only Spanish artist invited to participate in Documenta 11 in Kassel.