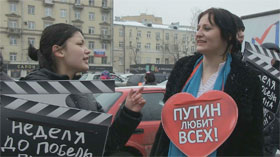 "Winter, Go Away!" was filmed by the graduates of Marina Razbezhkina and Mikhail Ugarov's Documentary Filmmaking and Theater School, on the initiative of Novaya Gazeta, an independent Russian newspaper. Ten young directors did not part from their cameras for two months. The result was a chronicle of Russia's winter protests - a chronicle of those who make the political climate and those who are dissatisfied with the makers. We see people, their faces, their conversations, rallies, victories and defeats ahead of the presidential election. A living camera interacts with living heroes. "Winter, Go Away!" is funny in places - and yet contains an overall sadness.

Marina Razbezhkina , director, script writer, producer and teacher lives and works in Moscow. Marina Razbezhkina’s workshop of documentary films at the Photoplay School is one of the most popular film schools in Russia, the graduates of which win prizes at Russian and international film festivals.