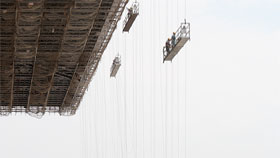 "Unsupported transit" is set on a construction site in Shenzhen, the first of China’s Special Economic Zones, where a new stock exchange designed by Rem Koolhaas’s Office for Metropolitan Architecture is now being built. On this site, a story is told that begins with Eadweard Muybridge’s early sequential photographs and a commissioned work he carried out for Leland Stanford before the famous horse pictures were produced.

Zachary Formwalt was born in 1979 in Albany, Georgia, and has been living and working in Amsterdam as a resident of the Rijksakademie since 2008. He is a graduate of the School of the Art Institute of Chicago and the Northwestern University in Evanston, Illinois, and attended the Critical Postgraduate Program at the Malmö Art Academy in 2004 and 2005. He has presented solo projects at the Elder Gallery, Lincoln (2006) and the Rooseum Center for Contemporary Art, Malmö (2005).