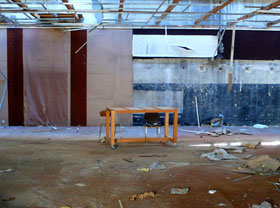 Before being made of images, this film is made of voices. It’s a polyphony. Anonymous voices that intertwine and overlap, answer and contradict each other. A descent into the depths of a city, fragments of life found in the streets or through cracks in walls, a slow wandering through the secret strata of a neighbourhood… pieces of a puzzle that don't easily fit in with each other. Place: La Joliette, a port district of Marseilles; to be more precise: a single block, half of which will be reduced to dust during this "walk around the block", that turns out to be as unpredictable as it is systematic. Time : towards the end of the “reconquest” of our cities, when fragile glass towers prospered on the ruins of relocated industries. Actors: some individuals, with conflicting interests, living in the midst of a development project that towers over them all, even those with the highest rank. The map of a sample of the world is sketched before our eyes. – Till Roeskens

Till Roeskens, born in 1974 in Freiburg, Germany, lives and works in Marseille, France. His photographic and video works has been shown in numerous exhibitions in museums as well as in galleries.