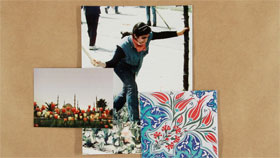 Grand Prize of the City of Oberhausen

Tribute to the US-American writer James Baldwin in which the artist links Baldwins self-imposed exile in Turkey with own biographical details and an exploration of his native country. Anecdotes of James Baldwin's time are juxtaposed in Turkey with historical informations and experiences from his childhood and acts as a storyteller. On the basis of old photographs and other images we follow the traces of James Baldwin as much as those of Aykan Safoǧlu and his family through Istanbul.

Sirah Foighel Brutmann (graduated P.A.R.T.S, Brussels, 2008) and Eitan Efrat (graduated Rietveld Academie, Amsterdam, 2011) are working in collaboration for several years, under the name of Til Far. They have created works in fields of video, film and performance. Their audiovisual works have been shown at filmfestivals as IDFA (NL), Media City (CN), Oberhausen (DE), Courtisane (BE), on television (Arte) and in exhibition as EMAF (DE) and Petah Tikva Museum (IL).