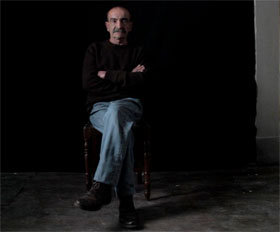 A neutral setting. No-man’s land. A man sitting on a chair, talking about his life. In his younger years, he was a soldier in an elite Portuguese commando during the colonial wars in Mozambique and Angola. After the Carnation Revolution, he worked first as a bodyguard in Portugal and then as a CIA-hired mercenary in El Salvador, before finally carrying out contract killings as a member of GAL, the anti-Basque underground organisation. The monstrosity of the atrocities he describes is at odds with the film’s formal minimalism and the protagonist’s way  of presenting himself. He remains unaffected when describing brutal details, makes incisive comments on the background to contemporary political history, tells jokes and talks big. His statements are numbered, forming the basis for research and reflection on the part of the director. An undertaking being carried out on shaky ground: facts and fiction, memories and fantasies, confession and self-portrayal flow into one another; reliability and identity are increasingly questioned. This tight, disquieting cinematic protocol of a shadowy existence evolves into a complex investigation of the basis and boundaries of documentary filmmaking. – Berlinale

Salomé Lamas, born in Lisbon in 1987. She studied directing and editing at the Escola Superior de Teatro e Cinema (ESTC) in Lisbon as well as at the FAMU
film school in Prague. She also studied art at the Sandberg Institute in Amsterdam. She works as a lecturer, researcher and filmmaker, and her installations and films are exhibited both in art spaces and at film festivals