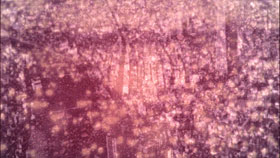 Born in Tokyo in 1978. Makino began making films in 1997. In 2001, after graduating from the Cinema Department of Nihon University College of Art, where he majored in Cinematography, he went to London alone to study under the Quay Brothers. He mainly studied film music and lighting. Makino continued to make films after returning to Japan and has held solo screenings regularly since 2004. He met Jim OfRourke in 2005, which accelerated his film making pace. His film, No is E won the Terayama Shuji Prize at the Image Forum Festival 2007. Makino was prominently featured at the International Film Festival Rotterdam 2008, where Elements of Nothing was nominated for the Tiger Award. Since then, as Japanfs leading experimental film artist, his films have been invited for screenings at more than 30 international film festivals and video art festivals. His installation using 35mm film and HD was exhibited at the Tokyo Metropolitan Museum of Photography. In 2009, still in cosmos won the Grand-Prix at the 25FPS International Experimental Film & Video Festival 2009. His first medium-length film, The World, was premiered at a late show at the Kichijoji Baus Theatre in Tokyo, marking the new dawn of experimental films.