I Will never change (Benga) 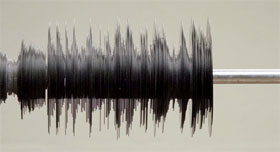 A lavish work on the topic of analog & digital by the design team Us. In the beginning was the question: How many records do you need for a second? Nine hundred hand-produced records were measured, cut to size, labelled and polished in seven days for this two-minute animation. – International Short Film Festival Oberhausen

Dubstep DJ/Producer Benga releases the single, ‘I Will Never Change’, taken from his forthcoming album, entitled ‘Chapter 2′, which is due for release in August. Benga has taken the melodic route with this track, resulting in a nice chilled out instrumental that will work well either in the clubs/raves or sitting at home on your bed with a pair of headphones on.

Us is a directing duo consisting of Christopher Barrett and Luke Taylor. They met while studying at Kingston on the BA Graphic Design course. The duo's first successful collaboration came whilst at university when directing a music video for Thom Yorke as part of the D&AD, it subsequently won first place.