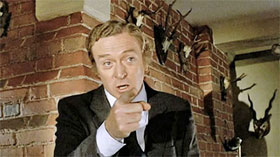 A transformation of Nam June Paik's text “film scenario” into a movie. Hollywood stars speak paik: “You can make any Hollywood movie interesting, if you cut the movie several times …”. Michael Caine, Humphrey Bogart, Elizabeth Taylor, John Torturro, Katharine Hepburn and other protagonists of mainstream cinema are assembled to speak a text about how to deconstruct watching films. – Viennale

2. Project without film, so we can enjoy the dust in the air.

5. Develop unfilmed film and project it. You are supposed to play it many many times before any public performance, so you get more "snow" - "snow" - on the transparent film.

6. Project a scotch tape and see.

10. For instance you follow a heavily loaded truck for about 30 minutes, filming it without interruption and show it to the audience, without cut from the beginning up to the end. Please lock the doors of the cinema, that nobody can escape, before the end of the movie.