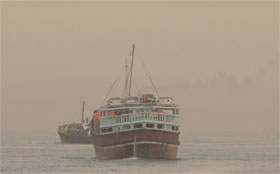 Abandoning the weighty mantle of auteur to become editor, and handing over the eye and the ear to the invisible ones, is the project of the Indian collective CAMP. Indeed, the material gleaned is the result of an exchange engaged in since 2009 with sailors who criss-cross the Arabian Sea from the Gulf of Kutch between India and Pakistan (whence they mostly originate) to the Persian Gulf and back. It is a long-term, large-scale project. Shot on a mobile phone, embellished with cheerful music deliberately chosen by these improvised directors, and destined to be addressed to their loved ones, what do these video-letters show us? Something spectacular, but to be distinguished from what is sold as that. On big wooden boats, which could be straight out of a costume drama, the adventure is that of the daily life of a “sea worker”. – Jean-Pierre Rehm & Nicolas Féodoroff

CAMP, is an artists' initiative, founded by Shaina Anand, Sanjay Bhangar and Ashok Sukumaran in Nov. 2007. Based in India.