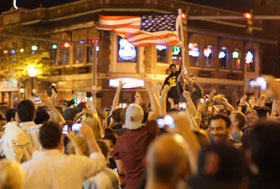 John Gianvito – My Heart Swims in Blood
While Afghanistan burns, America fiddles… a mosaical journey through a dark night of the soul.
Jon Jost – Empire’s Cross
A completely poetic evocation of the circumstances instigating America’s attack on Afghanistan, its methods, and of the deeply seated cultural origins of Western culture’s tendency towards warring. Minda Martin – The Long Distance Operator
An experimental narrative film short about a drone pilot in Palmdale, California who learns about the impact of his role in the war in Afghanistan from on-the-ground soldiers.
Travis Wilkerson – Fragments of Dissolution
A poetic, anguished cry from the heart of a rotting empire. Four women describe their own unique hells. Children, brothers, and friends burned alive while simply trying not to freeze.
Soon-Mi Yoo – Afghanistan: The Next Generation
This film incorporates various forms of archival footage – military, news, amateur and fiction– from different historical moments and seeks to expose the hypocrisy of the American occupation. Propaganda turned against itself.

Joshua Oppenheimer, born in 1974, Texas, USA. He has worked for over a decade with
militias, death squads and their victims to explore the relationship between political
violence and the public imagination.

Christine Cynn has been directing documentary and experimental films for the past 14 years. For the last decade, she has been developing new ways to document the human imagination. She was a researcher on the UK Arts and Humanities Research Council’s Genocide and Genre project.

FFilme (Oppenheimer): The Entire History of the Louisiana Purchase 1997 – The Globalization Tapes 2003 – The Act of Killing 2012