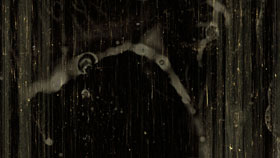 „I made really strange film with Ishida Takashi. He painted ink and melting scratch directly on 16mm and 35mm film, and I made moving image from those films. I think, making this film is one of the most impressive experience for me. After making images, we play music, Ishida played piano (I didn‘t know he can play piano), and I played drums and noise (nobody knew I can play drums).“ — Makino Takashi

Takashi Ishida, painter and film maker, born in 1972 in Tokyo.