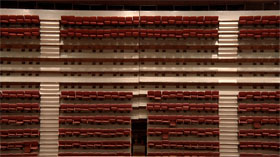 The films examines a moment of fundamental change in the understanding of public space in post-communist Bulgaria. The Palace for Sports and Culture in the Bulgarian Black Sea coastal town Varna was built as a prestige project of modernist architecture for the communist understanding of theatre and sport. While no changes were made to the interior design since its opening 1968, every week the main hall changes its architectural and social function. – Daniel Kötter

Daniel Kötter, born 1975, is a director and video artist with a particular interest in multi-channel video installations and alternative concert formats.