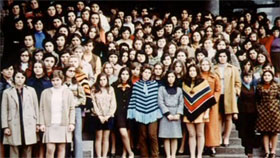 Instead of delivering a militaristic propaganda short depicting carefully orchestrated maneuvers of large squadrons of troops over the barren hills of Macedonia, he created what film curator Vassily Bourikas calls ‚one of the most farcical antmilitary films created by a military film unit’. He interwove the military footage with shots of a nearby village where no less than 7.000 single women, factory workers, young nurses and schoolgirls, lived at the time, completely isolated from the boys serving the army. — Jurij Meden