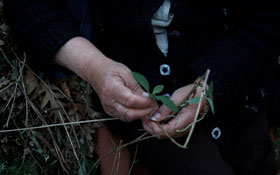 The inhabitants of a small village lost in the woodlands between Galicia and Portugal live and work in a quiet routine. From time to time, brief conversations arise amongst them. Surrounded by an endless forest, incapable of finding a way out, the Arraianos ask themselves about the reasons for their confinement, wondering if such things as sunlight, free will or a horizon really exist. One day, a stranger arrives; the possibility of change, a way out, a means of purification… What is left after the end, when all has been consumed?
Somewhere between reality and fable, the Arraianos play out their lives to make a portrait of the rural world and its obstinate resistance to disappear, a picture of life as it is.