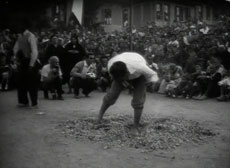 This widely acclaimed ethnological film records a traditional Greek rite which, now Christianized, goes back to the ancient Orphic Mysteries of Thrace: walking bearfoot on burning charcoal without pain or burning. 'One of the rare perfectly authentic film records of possession; nothing was simulated; of inestimable value in the history of religions ' (UNESCO). As we 'actually' see each participant go through the rites of preparation and then walk leisurely over the hot coals, we react in wonder and confusion. – Amos Vogel

The short documentary Anastenaria by Roussos Koundouros is the only Greek film mentioned in the book Film as Subversive Art, a testament not only to Vogel's own ability to unearth important films from the ends of the world but also of Koundouros's creative merit. Koundouros even in Anastenaria continues to blend the ethnographic with the scientific, on the one hand recording an ancient rite with great respect, while on the other trying to rationally explain it. – Vassily Bourikas 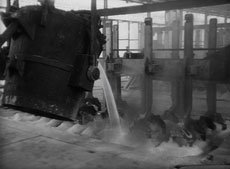 "Aluminum of Greece" is by definition what one would today call a "corporate video". Greece's cinematic image in the early 60's was not one of hi-tech industry, let alone industrial films, therefore this wordless pièce de résistance already speaks volumes of divergence before it even begins. When it does begin Koundouros "surgical" filming and editing skills and Tania Karali's electronic sounds offer a rare and extreme contrast to the more easy-going neorealist treatments of Greek cinema at the time. Structurally it is almost a time-lapse, starting with the empty field where the factory would be built and ending with the packaging of the product. Besides some captions, explaining the process of turning bauxite into aluminum, the only commentary is delivered by the writing on a massive crane structure on rails that resembles a human shape and on its "chest" it reads: "Do Not Prevent my Advance". Aluminum of Greece is not a technocrat's dream, there is a holiness and subversiveness in this short film that transcends the stereotypical image of a rural country, both subject matter and filmic treatment would surprise and amaze audiences back then as they still do today. – Vassily Bourikas

Roussos Koundouros, born in 1923 into an affluent Cretan family, trained as a surgeon but gave up medicine to concentrate on documentary, initially with a series of films on experimental surgery from Greek hospitals in the early 50's. His efficiency and precision landed him numerous assignements which, as the two films on show demonstrate, he treated with unique devotion. He directed over 50 films, the last one funded by Unesco and following the footsteps of Alexander the Great's troops was abandoned when the dictators took power in Greece in 1967. Like many cultural practicioners of the left he fled the country, but unlike most he went to Cameroon where he was a pivotal force in the development of the country's media. Upon his return to Greece, with the end of the junta, he gives up filmmaking and concentrates on the development of free broadcasting, spearheading the most exciting first efforts of the new Greek radio, until his early death in March of 1990.