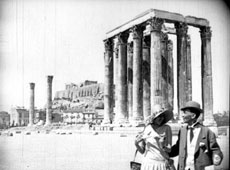 "Villar’s Adventures", the oldest Greek feature film, to be saved and restored by the Greek film Archive (Tainiothiki tis Ellados) is the second act from a two-reel comedy, shot by Joseph Hepp, starring a burlesque comedian Sfakianos (or Villar), who had trained in France. Villar made a lot of comedies, which had a great appeal to the Greek audience, but unfortunately no other has been recovered.

In 1963, Aglaia Mitropoulou, the founder of the Greek Film Archive, persuaded Joseph Hepp to donate his large and important collection of Greek films and newsreels to the Greek Film Archive. It was in this material that some sections of the second act of "Villar’s Adventures" were recovered and had to be restored. In 1972, there was a first effort to restore the film. In 1991, the Greek Film Archive's Department of Conservation and Restoration undertook the complete restoration.

Villar gets a job at a dry cleaner's but falls in love and chases his prospective sweetheart all over Athens: from the neoclassical buildings of Stadiou Str to the seaside suburb of Phaliron. His desperate chase takes him from the temple of Olympian Zeus up to the Herodus Atticus ancient theatre. He runs along busy streets always attracted to charming women. He makes one gaffe after the other and gets involved in various adventures. He even dances under the jazz rhythms of a band from New Orleans in the seaside suburb of Phaliron. Joseph Hepp and Sfakianos Nikolaos (Villar) adapt Mac Sennett's gags and the burlesque repertory to their Athenian farce and setting. Because they mainly shot on location, the film has a great value as a portrait of the Greek capital in the 1920s. – Maria Komninos

Joseph Hepp was born in Budapest in 1887 and came to Athens to work as a projectionist at Panellenion cinema theatre. The Young Princes in the Palace Garden and The Entry of the Greek Army in Thessaloniki (1912) are the first newsreels he shot in Greece. In 1916 he worked as a photographer on the movie "The Cavalry" the first one on which he collaborated with Demos Vratsanos on the screenplay and direction, while in 1917 they continue their collaboration with Anthoula's Dowry. Following his two-year-long exile (as a staunch supporter of the Kaiser) he returns and begins his most prolific period as he filmed military operations in Thrace in 1919 as well as the entire Asia Minor Expedition as an official cameraman for the Greek Army. Today this footage is a document of unique importance. In 1923 he collaborated with comedian Villar and they shot the comedy "Villar at the Ladies Baths in Faliron". In 1929-30 he makes an effort to add sound to the film "The Convict" with the tenor Angelopoulos. As Aglaia Mitropoulou informs us, he "made his own version of Warner’s Vitaphone that is an amplifier with a loudspeaker which synchronized the disc with the voice, the film and the speaker". He pursued this experiment on his next film, "The Chambermaid and the Grocer" but he could not perfect it and so he abandoned it. He continued working as a cameraman, notably on Leni Riefenstahl's "Olympia" (1938), the Greek-Italian War and the Civil War, while in parallel he is the cinematographer of some of the greatest hits of that time, such as: "The Germans are Back" (1947), "The Drunkard" (1950), "Bitter Bread" (1951), "Neighbourhood Girl" (1953).