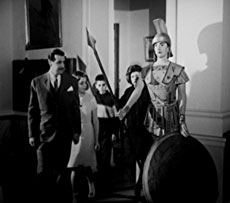 Greece, the early 70's. A family visits the museum of the 1821 Greek Revolution and War against the Turks. As they wander inside the museum, one of the paintings comes to life ...
'Sabotaged' version of a rare -found- propaganda film, produced during the Greek military junta in the 70s, supporting a largely debated fact -for many a national myth- related to the birth of the modern Greek nation and the construction of its ethnic identity. – Marina Gioti

Marina Gioti, born in Athens, Greece. She has studied Chemical Engineering, Environmental Management, Filmmaking and Media and Communication in Greece and the UK. Since 1999 she lives and works in Athens as a filmmaker and video artist working mainly with found footage and animation.