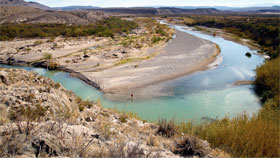 A refreshing antidote to the burgeoning genre of films that focus on illegal immigration and cross-border violence, Peter Bo Rappmund's experimental portrait of the U.S.-Mexico boundary surveys this wide swath of land's physical qualities and metaphysical quandaries with an artist's gaze. The structure of "Tectonics" is dictated by the border itself, as Rappmund incrementally moves from the Gulf of Mexico bordering Texas, to the Pacific Ocean and California, capturing wide vistas of the American West, the Rio Grande, the monuments and memorials to (personal) histories, and, naturally, the fences and walls that have been escalating since the Bush Presidency. (The actual border appears in 95% of the shots.)

Rappmund's unique process involves shooting photos with a DSLR camera, usually one frame per second, then animating the images in post-production. This method yields jaw-dropping, high-resolution time-lapse photography, described by Thom Andersen as "electronic Rothko". At times, "Tectonics" resembles surveillance photography, and what's present is just as important as what's absent: the world's most traversed border is also surely the most observed, with visible and hidden cameras, armed patrols, aerial surveillance, motion sensors, etc. Over his voiceover-less images, Rappmund lays a soundtrack that fills in the missing human presence, and deconstructs the sociopsychological image of the border in American society: though everyone has a view of the border, its reality remains unseen. – Mark Peranson

Peter Bo Rappmund, born in 1979 in Casper, Wyoming, lives and works in Laguna Beach, California. He is photographer, film maker and music composer.