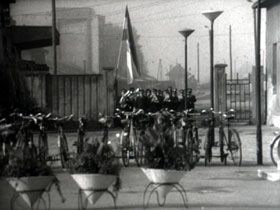 „A documentary film about the departure of our people to work in Germany. The new labour force decends to Munich‘s underground, and here, instead of a name, each man is given a number.“ — Krsto Papić

Petar Krelja (geb. 1940 in Štip, Macedonia) is one of the most prolific and acclaimed Croatian filmmakers and screenwriters, as well as renowned film critic whose career in both fields spanned several decades. In mid-1960s Zagreb he got involved with a group of cinephiles and film critics promoting the „politique des auteursˮ and started to make films of his own. He made more than 200 mostly socially committed documentaries focused on social rituals, ordinary people, delinquents and outsiders.