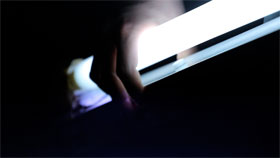 The severe earthquake in the sea near Sendai on 11 March 2011, measuring 9 on the Moment Magnitude Scale, caused the death of tens of thousands Japanese people. It also caused severe damage to parts of the Fukushima I nuclear power station. As a result, radioactive material was released into the atmosphere. What consequences did this have for the Japanese population? In this experimental documentary, the makers travel through the history of nuclear energy in general and that of Japan in particular. With the aid of interviews, old public information films, newsreel items and jerky shots of disasters, questions are answered and new questions posed. How great is the radioactivity as described? How is it measured? Why have parts of Japan emptied and why do the inhabitants who remain behind live like high-class laboratory rats? And what does it say about a government which exposes its citizens to this danger? – International Film Festival Rotterdam

The Otolith Group is an artist-led collective from London, founded in 2002 by Anjalika Sagar and Kodwo Eshun. Their work is very diverse: from film productions to international (solo and) group exhibitions and publications. Work by this British collective was shown at the Biennial in São Paulo in 2010. That same year, The Otolith Group was nominated for the prestigious Turner Prize.