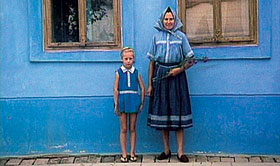 With ‚Litany of Happy People’ won Godina two awards at the acclaimed Oberhausen short film festival in Germany, while censorship at home, desperately trying to decipher it’s cryptic subtext, in the end decided to ban the film merely on suspicion that it contains ‚certain’ inappropriate hidden messages. While precious as an ethnographic document, an experimental musical or simply an amazing, rapid display of faces and colors (each ethnic group uses a different color to paint their houses: Croatian houses are golden-yellow, Slovaks use blue, Hungarians green, etc) ‚Litany’ perhaps stands out mostly because of its elusiveness. — Jurij Meden