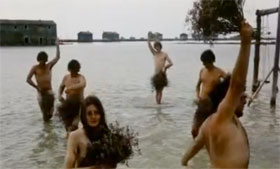 „A short experiment, as weird and extravagant as its incomprehensible title, made in collaboration with an avant-garde theatre troupe by the name of Pupilja Ferkeverk. It can be viewed as a recording of a care- fully constructed performance, a spontaneous ritual or simply of a bunch of long-haired, sea-hugging naturists tripping. In any case, it’s a lethal capsule of infectious enthusiasm, while the off space literally reeks of (never actually depicted) sex. When asked about the making of this film, Godina will today, smilingly, explain that he indeed remembers that the shooting took place some place and some time ago, but that is about it”. — Jurij Meden